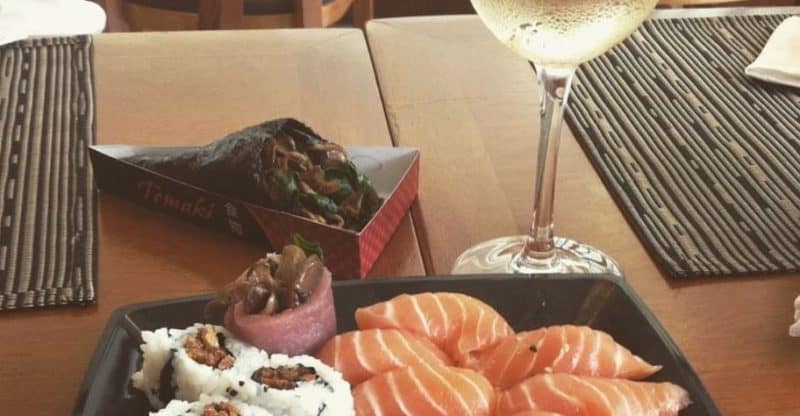 Home
Drinks
What to Drink With Sushi? My Complete Guide!
22
SHARES
ShareTweet

Most people will tell you the best thing to drink with sushi is Sake, but that’s not really true. Just because you’re eating sushi doesn’t mean you can only drink Sake with it. In fact, most sushi in Japan is eaten with beer, and seldomly sake.

I love sushi and what I refer most is drinking a beer with my sushi as well. Not any old beer of course, but a nice Japanese beer. They go well with sushi, and so do a few other both alcoholic drinks as well as non-alcoholic ones.

I’ll break everything down into categories in case you’re in a hurry to meet your friends out at a sushi bar or somewhere. Look below for a quick link to see what my personal recommendations are. And by the way, I have eaten sushi many times in Japan paired with everything from sake to lemonade. So I really do know a thing or two about pairing drinks with sushi.

What to Drink With Sushi Rolls? A Beginners Guide

First off I want to start by getting you thinking about the food you’re pairing your drinks to. True sushi is made with fresh fish and rice plus a few other simple ingredients. This means the flavors are subtle, not heavy.

This also means you need to think of drinks that are light as well, and when possible, clean the palette so you can enjoy the next piece of sushi without a heavy taste on your tongue. This is true for any of the categories of drinks I’m recommending below.

Drinking beer with sushi is my personal favorite. But not any old beer. For sushi I highly recommend having a Japanese beer like a Asahi, Sapporo or Kirin served in a frosted beer glass. These beers are similar to a Coors Light or other American light beers. Only the have a “crispier” to them American beers don’t have. And you can usually find them easily enough. Almost any real sushi place will carry them too.

And although Guinness is and will probably always be my favorite beer, it just doesn’t do well with sushi. Any sort of dark beer will just over power the taste of sushi. As will hoppy beers and most IPAs.

But if you seriously can’t find a Japanese beer, then try a Coors Light or even an Amstel Light. Both do well with sushi and are light enough not to hide the flavors. But they do lack the crispiness of a good Japanese beer.

Again, follow the same rules as above, nothing heavy like a Bloody Mary or Rum and Coke! You also don’t want to go with anything straight, on the rocks or not. You want light drinks like a spritzer made with soda water, or a Vodka Tonic.

My favorite spritzer to drink with sushi is a Rose Spritzer, which originated in Australia but is getting more popular in the states. They’re made with Rose Wine and they pair really nicely with sushi as do some other wines as you’ll see below.

But the ultimate mixed drink for me is a Domo Arigato. This particular Mexican drink has mescal, fresh ginger juice, lime, and a few drops of sesame oil. And if you think about it, all of these ingredients pair really well with sushi. Ginger is especially perfect with sushi and most sushi houses will give you some pickled ginger to clean your palette between bites. So this drink does the same but in liquid form.

And don’t ask me why, but Mescal also goes well with sushi. I tasted a lot of Mescals when I was living in Mexico, and they are amazing, soooo much better than Tequila! So if you do get a chance to try the drink with some sushi, do it, you’ll thank me later!

And if you must have something with more sweetness or taste, then try a mojito or a margarita. For me they’re too sweet to be eating with sushi, but a few friends really enjoy these drinks when we dine together. So if you must, try those two before moving on to something else.

Wine is probably the easiest for most sushi beginners to get accustomed to. So if you’re new to sushi, try either my beer pairings or a wine pairing.

Wine does well with practically anything. Think wine and fish pairings and you’ll see why. The same rules basically go with sushi. Again, choose lighter wines, mostly white wines like Chardonnay, Pinot Blanc, and Pinot Grigio. Their lightness brings out rather than hides your sushi flavors. Stay away from the darker and fuller reds.

And don’t forget white wine spritzers. They always pair well. And try having them chilled, not full of ice.

If you’re the designated driver, I apologize. But that doesn’t mean you and the kiddies can’t enjoy a nice beverage with your sushi. In fact, there are a lot of drinks that go well. The first I’d go with is a Ginger Ale. Again, the ginger flavor goes well with sushi. And if the kids want something special, make it a Shirley Temple. Smiles all around!

Teas are also great with sushi, especially on a cold day. I’m talking Asian warm teas, not the bagged harsh stuff that costs five cents a bag. And NO coffee!

Asian green tea is often paired with sushi in Japan. So are ginger teas. They work really well warm or cold.

Visit any sushi restaurant in Japan and you will usually find green tea served alongside it. The most common tea found in sushi restaurants is Agari, which is made from Konacha. It is typically served extra hot, as it acts as a pallet cleanser to help remove oil from the mouth as you eat sushi.

While Agari is the most common, Sencha, Genmaicha or Matcha can also be commonly found served with sushi. Agari is actually made from the by-product of more expensive teas like Sencha and Gyokuro and is typically given for free in Sushi restaurants. It has a slightly astringent (bitter) flavor compared to other, higher grade Japanese teas like Sencha or Gyokuro.

If you can’t find Agari tea, there are other options to try. According to Sam from Kenko Matcha, these Japanese green teas also go well with sushi:

The most common tea in Japan, sencha is made from fully Sun grown (non shaded) tea plants and comes in a range of grades. Being a non shaded tea, it has lower umami and sweetness than something like gyokuro, so makes a great option for serving with Sushi. If you have tried loose leaf Japanese tea before it has most likely been a Sencha.

Genmaicha is also a widely served tea in Japan, and pairs well with most foods. It is made from mixing sencha and roasted brown rice. It is particularly noted for its mild taste, and nutty roasted flavor from the rice. Many people drink it due to the calming feeling that the roasted rice gives. It can be paired with most foods and is a great option as light afternoon tea due to the lower caffeine content than other green teas.

Literally ‘ground tea’ in Japanese, matcha is a powdered form of green tea made from shade grown tea leaves. Unlike loose leaf Japanese teas, the leaves are ground into a fine powder after processing to produce matcha green tea powder. With matcha you consume the entire leaf instead of steeping it into a drink, so you get all the benefits from the tea leaf. Matcha pairs well with sushi, as it has a light astringency (bitterness) although you probably wouldn’t consume the higher grades alongside sushi, as it might overpower the sushi flavor.

So there you have it, my favorite drinks to drink with sushi. And if you have a personal favorite that isn’t listed, please let me know! I’d love to share them with everyone.