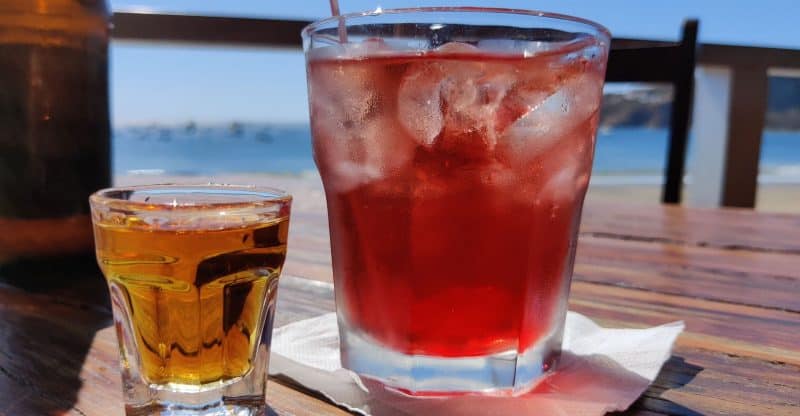 This is truly one of my favorite hot weather, lighter drinks. I know a lot of people that like vodka and cranberry, but I’m telling you, rum and cranberry is so much better!

This drink is light, refreshing and is perfect for any hot weather drinking like a beach or pool party. And hey, you can feel a bit better about having a few of these due to the cranberry juice being something actually healthy unlike a your typical rum and coke. Plus there is far less sugar and chemicals than a lot of other mixers.

I got hooked on these since moving to Nicaragua. Rum is super cheap here, so it’s the perfect place to play around with different rum concoctions. And this one is a true winner.

For the rum, I like Bacardi or something similar. Right now I’m in Nicaragua, so for this recipe and the pictures I’m using Flor de Cana five year rum. So this is really a dark rum and cranberry drink. But I’ll go into the rum choices later in this article.

Remember, this drink only has two ingredients (3 if you count the ice), so the quality of each will make a difference in the taste of the final drink.

Cranberry, unlike other mixers, doesn’t hide the alcohol’s flavor your mixing it with too much. So you should use a better brand of rum. Stick to a middle shelf brand like Bacardi or something similar. Or use the Flor de Cana 4 or 5 year if you can find it. There’s no need to use an upscale rum, save those for sipping.

You’ll need a rocks glass, some ice, rum and cranberry juice. That’s it. It takes less than a minute to make. Oh, and a standard shot glass if you’re measuring your alcohol.

I don’t garnish this drink at all. If I had to choose one though, I’d go with a Maraschino cherry. Anything else like a lime or what have you wouldn’t work. Cranberry is a unique flavor and doesn’t go well with too many other fruits.

And if you want to tone this drink down a bit, instead of a rocks glass, use a pint or larger glass using a standard shot, lots of ice and more cranberry juice. 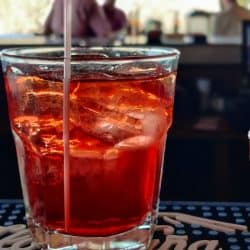 Like I wrote above, I used the local Flor de Cana rum. It’s actually a nice rum and cheap as chips here. A rum and cranberry with 4 or 5 year rum is a little over two dollars. Wondering why I live abroad?

In the pictures I went with the 5 year. It has a stronger flavor than the 4 year. I’d equate the 4 year as the same tier as a Bacardi. And either mixes well with the cranberry.

But the usual rums you can get almost anywhere like Bacardi, Captain Morgan or Castillo Silver Rum will work just fine for a white rum and cranberry juice cocktail. Just don’t go cheap, cheap. It just won’t taste as good. And yes, you’ll definitely be able to taste the difference. Most likely if you order this at a bar you’ll get Bacardi and cranberry juice or Malibu Rum and cranberry juice. They’re both good so just go with what the bar has.

What Alcohol Goes with Cranberry Juice?

I’ve tried cranberry juice with Malibu Coconut Rum. The taste didn’t leave me with anything to write about. I didn’t like the mix at all and much rather stick to just a plain rum. Coconut and cranberry just don’t work together very well.

Of course you can go with Vodka and Cranberry. This is a staple bar drink. But I’ve also tried cranberry with Tequila and Whisky, the American Jim Beam brand. Neither were that good as a standard two ingredient drink and I won’t be mixing these again.

It seems cranberry is best with either rum or a smooth vodka. And that’s about it if you’re making a two ingredient drink. If you think you’ve found a predominantly cranberry mix that works, let me know in the comments and I’ll give it a try!

What is Rum and Cranberry Juice Called?

It’s simply called a Rum and Cranberry Juice Cocktail. It’s not like a rum and coke that is also called a Cuba Libre. Although a rum a cranberry should be called a drink and not a cocktail.

I want to say thanks to my friend and bar tender Manny for mixing this up and letting me take a few pictures. If you’re ever at Iguanas in San Juan del Sur, say hi to him! He makes a killer drink!