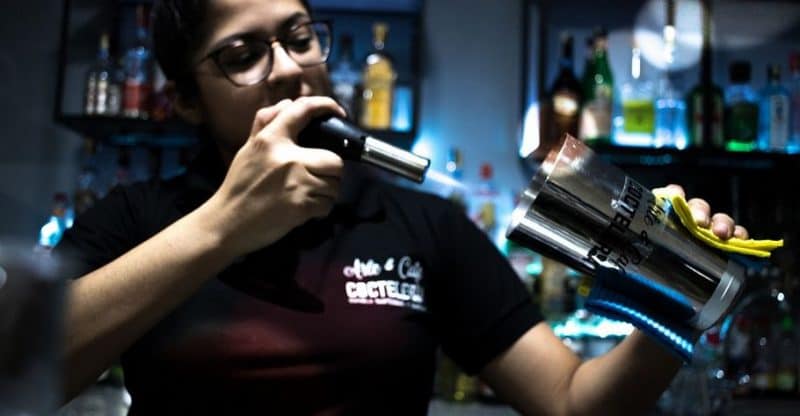 Home
Tips
Mixology Terms – All the MUST Knows!
20
SHARES
ShareTweet

Mixed drink terminology is a way of describing a type of drink and also tells the bartender how to make the drink. Learning these terms is a basic requirement for all bartenders and are useful even if you’re just a home bar enthusiast.

A shaken drink means you are mixing the drink directly into a shaker. Close the shaker with either the other half of the tin or another glass and shake until the drink is cold (usually 5 times is a good estimate). Then pour the shaken drink into its serving glasses. This method is used to prepare a single drink up to several shots.

When shaking a drink be sure to firmly grab your cocktail shaker and aggressively shake it about a dozen times to fully mix the ingredients. Shaken drinks will be cloudier but more thoroughly mixed.

When James Bond requested his Martini shaken, not stirred, he was doing something a bit avant garde – many people believe that shaking a martini bruises the gin and detriments the flavor. We don’t believe that it does, and that risky rapscallion James apparently doesn’t, either.

Chilled drinks require an ice cold glass before adding your concoction. Glasses are chilled in one of two ways. They are either kept stored in the freezer until served. Or do the following bartender’s trick to instantly chill any glass yourself.

First, fill the glass with ice.

Second, add water to the glass until it is almost full. Leave it on the bar while you perform the next step.

Third, prepare your drink in a strainer or blender if required. If not, wait until the glass feels chilled on the outside usually displaying frost on the surface.

Finally, pour out the ice and water and add your prepared drink or make the drink as normal in the newly chilled glass.

A build is the most basic drink you’ll be making. Its called a build simply because you add ice to your glass, pour in your mixer or two, then add your alcohol. You’ve just “built” a drink.

A float contains an ingredient which is added at the end of a drink and does exactly what its name suggests, floating the final ingredient on top of the previously added liquids. The floating ingredient usually adds a level of character to the drink and a hint of an additional flavor.

How does it differ from a Layered drink? Floats contain less of the final ingredient, usually around half an ounce.

The technique of layering drinks requires pouring different liquors or beers on top of one another without mixing them. This is possible because different alcohols have different consistencies. The most common way of layering is using a bar spoon to soften the pour of the top layer onto the previous layer in the glass.

Straining a drink requires preparing it in a shaker, then covering half of the shaker with the strainer tool before pouring the drink over ice. Usually this is the technique most often associated with Upscale Drinks.

Neat drinks are simply a drink poured at room temperature.

Most bars nowadays will not allow flaming drinks. For the more outgoing bars that prefer to put on a bit of a show, take caution when flaming any drink always stifling the flame before serving to the customer. The preferred method of putting out the flame is to quickly cover the entire rim of the glass with a coaster. Your bar will walk you through their methods when you are hired.

To roll a cocktail, add its ingredients to a shaker. Then close the shaker, roll it back and forth once, pour the drink into a glass and serve.

Muttled drinks require a special crushing tool such as a mortar. Muttling simply refers to crushing specific ingredients in glass before you add liquid to the mixture.

Stirring is meant to evenly mix the alcohol and the mixers without clouding the drink.

Some drinks need to be blended to mix the ingredients. When using an electric blender to blend ice, partially blend the ice before adding anything else. After the ice has been broken into chips, use the hole in the top of the blender’s cover (called the drop slot) to add other ingredients.

The general rule is that you should add frozen items first and liquids last.

A frosted glass is one which has a thin layer of ice over it. To frost a glass, place the glass in water and then freeze for approximately half an hour. Because water does not stick to glass, it is easier to frost pewter and other metal cups.

When decorating a drink it is common to also add a lime wedge or cherry to make it more attractive. When the decoration of a drink also impacts the taste of the drink, it is called a garnish. Advice on how to garnish drinks is available here.

If you add something to decorate a drink which does not influence the flavor, it is called garbage. Examples include plastic swords, plastic monkies, and a fireman’s hat. Advice on how to add garbage to drinks is available here.

When mixing a drink, first add the ice, then the alcohol, then the mixers. This build order is often also called “building” a drink, and it tends to keep the alcohol the same cold temperature within the drink.

With drinks like the lemon drop or the margarita, bartenders are encouraged to rim the glass with salt or sugar. The easiest way to do this is to first rub a lime or lemon across the rim of the glass.

Then, you should set the glass rim-down in a plate of salt or sugar and twist the glass until the rim has been submerged about an eight of an inch into the salt or sugar.

When you lift the glass out, it should have a thick coating of either salt or sugar. 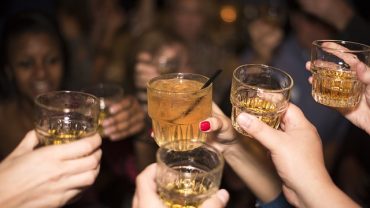